I vividly remember November 1989, I was in form two (12 years old) in Mr Brock’s class at St Peters School in Cambridge, and we watched on television (of course not live) the events in Berlin as the Wall “came down”.  So, it is no surprise that one of the first things I did when we arrived in Berlin was check out the key aspects of this event, and the historical landmarks that led up to this event.

We headed first to the East Side Gallery, an approximately 1.3km area where segments of the wall remain. We started our wall experience apparently out of sync with the proposed route, and proceeded to view the wall near the Oberbaum Bridge, a former checkpoint between East and West Germany.  Whilst we were on a limited budget, we did decide to visit The Wall Museum as I was still trying to get my head around how the city had been fragmented in the past (BTW, the museum is worth checking out).  I think this gave me better context for the walk past the wall/memorial, certainly as I walked along I was able to imagine a time when people woke up one day and found a wall of men with their arms linked, and people were no longer able to cross.

View from the Museum – in the former Death Zone

The metro closest to the Wall

I did find myself wondering what life on the West would have been like, we have a reasonably good understanding on how the East was, however I think we tend to forget that the West was still “under occupation” even if it was being administered with a lighter hand.  I kind of drew a conclusion that maybe some of the euphoria of 1989 was not just a wall coming down, but truely the end of World War Two for the German people – where they were able to be unified as one nation, and truely self governing.

Interestingly, I took this view with me when we went to see Check Point Charlie, the place where the Cold War almost got hot.  Looking at the East and West side of the Check Point, and based on my previous nights musings, it seemed ironic to me that the former West side was now flagged with a McDonalds and a KFC. 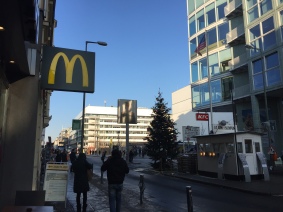 Formerly the West Side 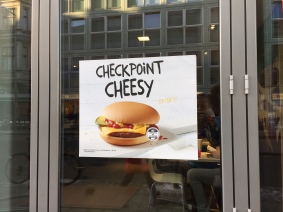 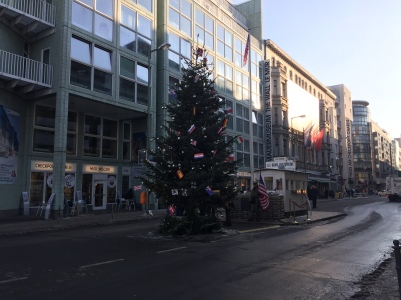 View from the “East”

What is now occupying the East

Classic pic, had to take it

As much of the Berlin central city was formally in East Berlin  we headed to Alexanderplatz, where on 4 November 1989 it was the scene of the largest protest against the Government for reform that had ever occurred in East Germany.  The area now is filled with shops and people busking, but there are still little signs here and there of the passion that must have been evident on that day. 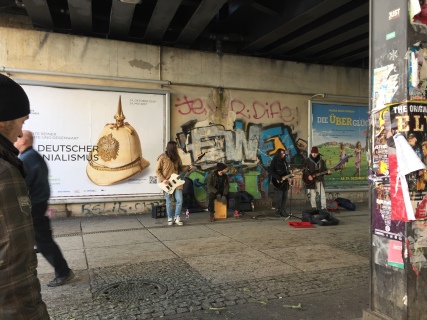 We ended the day by heading to the Stasi Museum, at the grounds of the former headquarters for the GDR Ministry for State Security (known as Stasi).  Keeping an entire population under strict control requires a lot of work, and this Museum provided an informative and interesting perspective of how this was done.  What was most chilling for me was understanding that anyone could be an informant, and that the people of East Germany must have lived in fear never knowing who was spying on you, or providing information to the Government about you. 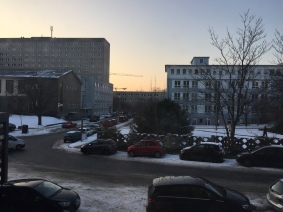 Benign view out the window

Being able to stand in the very same places that I had seen as a child from nearly 18,000km away was something I never really thought would mean anything.  However, what I came to realise was that the ability to fill in the many contextual gaps by being there provided,  made the events of 1989 much more poignant and real.